Liz Truss is MP for South West Norfolk and Secretary of State for International Trade and President of the Board of Trade.

Born in Leeds to left-wing parents, Liz broke the mould and started her career as an economist and accountant with a Conservative membership card. She was elected as a councillor in Greenwich in 2006, and then as MP for South West Norfolk in 2010. She was one of the first MPs of her intake to enter Government in 2012.

A staunch defender of South West Norfolk’s interests, she has fought many successful campaigns for the area, including the dualling of the A11, the F35 fighter jets to be based at RAF Marham and for better rural broadband.

Liz is passionate about giving every child basic maths and science skills, and recently provided funding for more maths teachers, a premium for schools whose students study maths, and the extension of the Maths Schools programme.

As self-styled ‘Disruptor-in-Chief', Liz is not afraid to speak her mind, and believes liberating people to start and grow businesses without burdensome red tape is the key to our economic future. She has argued strongly against the Big State policies of Jeremy Corbyn’s Labour Party, which she believes will damage choice, innovation and prosperity.

As Chief Secretary, Liz was tasked with keeping a watchful eye on the public finances and driving productivity in public services, so taxpayers get the most for every pound spent. She travelled to Japan, South Korea, Brazil and Chile to see how countries around the globe are turbocharging economic growth, controlling public finances and delivering world-class public services. In July 2019, Liz became Secretary of State for International Trade and President of the Board of Trade. As Secretary of State, she has overall responsibility for the business of the department. At a crucial time for Brexit, Liz is charged with securing new trade deals and partnerships across the world.

A prolific tweeter, Liz is among the most followed government ministers on social media. You can keep up with Liz’s activity by following her on Twitter (trussliz), Instagram or LinkedIn

She lives with her husband and two daughters, dividing her time between Norfolk and London. 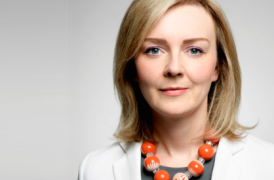